We are very proud of our Year 11's who have have just finished their mock examinations. Supported by their Head of Year, Mrs Cresswell (who saw them at the beginning of every exam with a subject related joke!), they showed great tenacity and resilience throughout. Now they have some time to take a breath, return to lessons and look forward to their well deserved Christmas break. Well done Year 11!

Annie rehearsals are ongoing and the students are working hard to prepare for the opening night. The students involved are sounding really great so please come along to support them in December. (Poster below).

This month's Ribston Roar lion has been drawn by the talented Martha Scanlan in 9B. She has drawn this using digital art and I'm sure you'll agree he is absolutely ferocious! 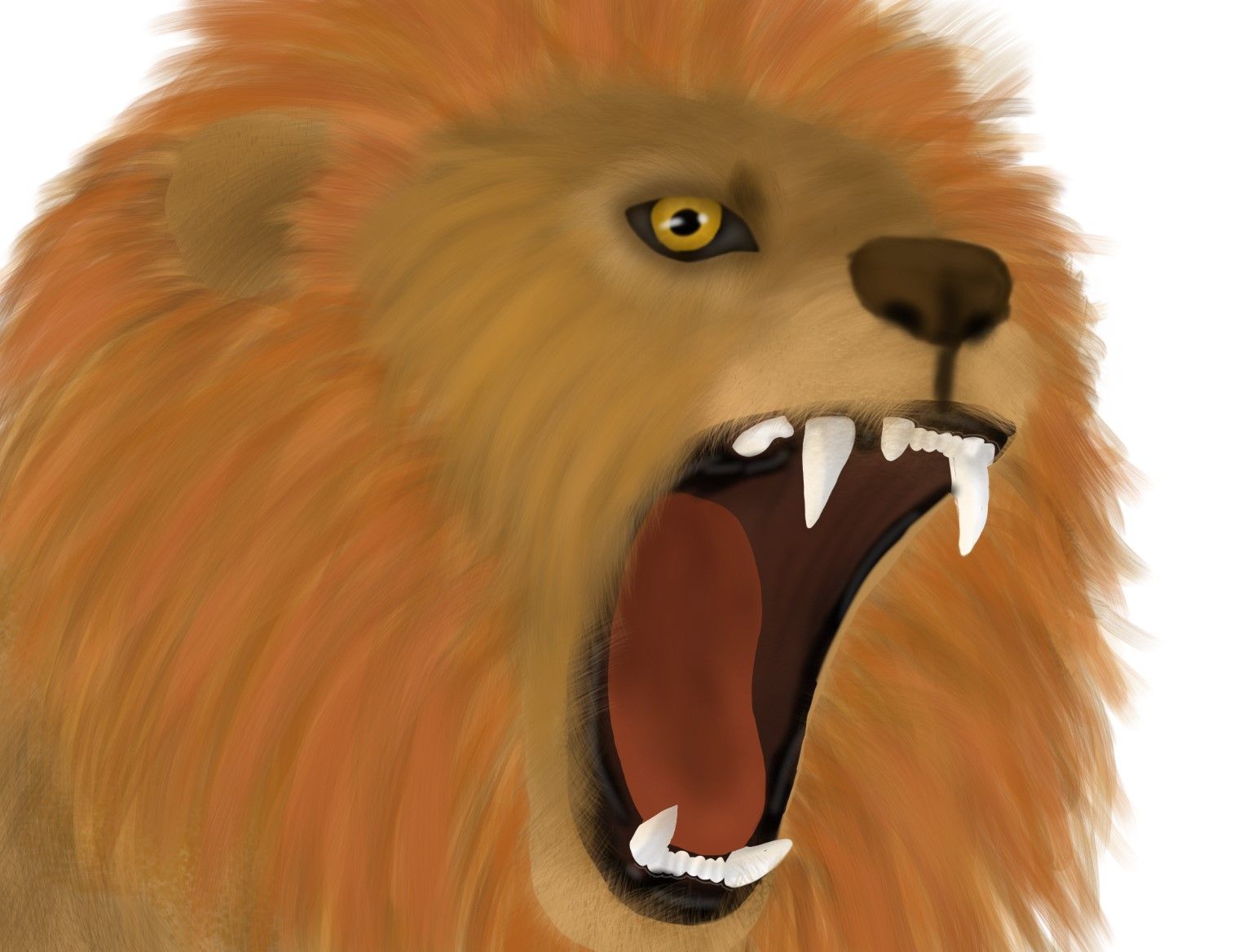 Congratulations to Dane's who won the Yr 7 Swimming Gala on the 8th November! 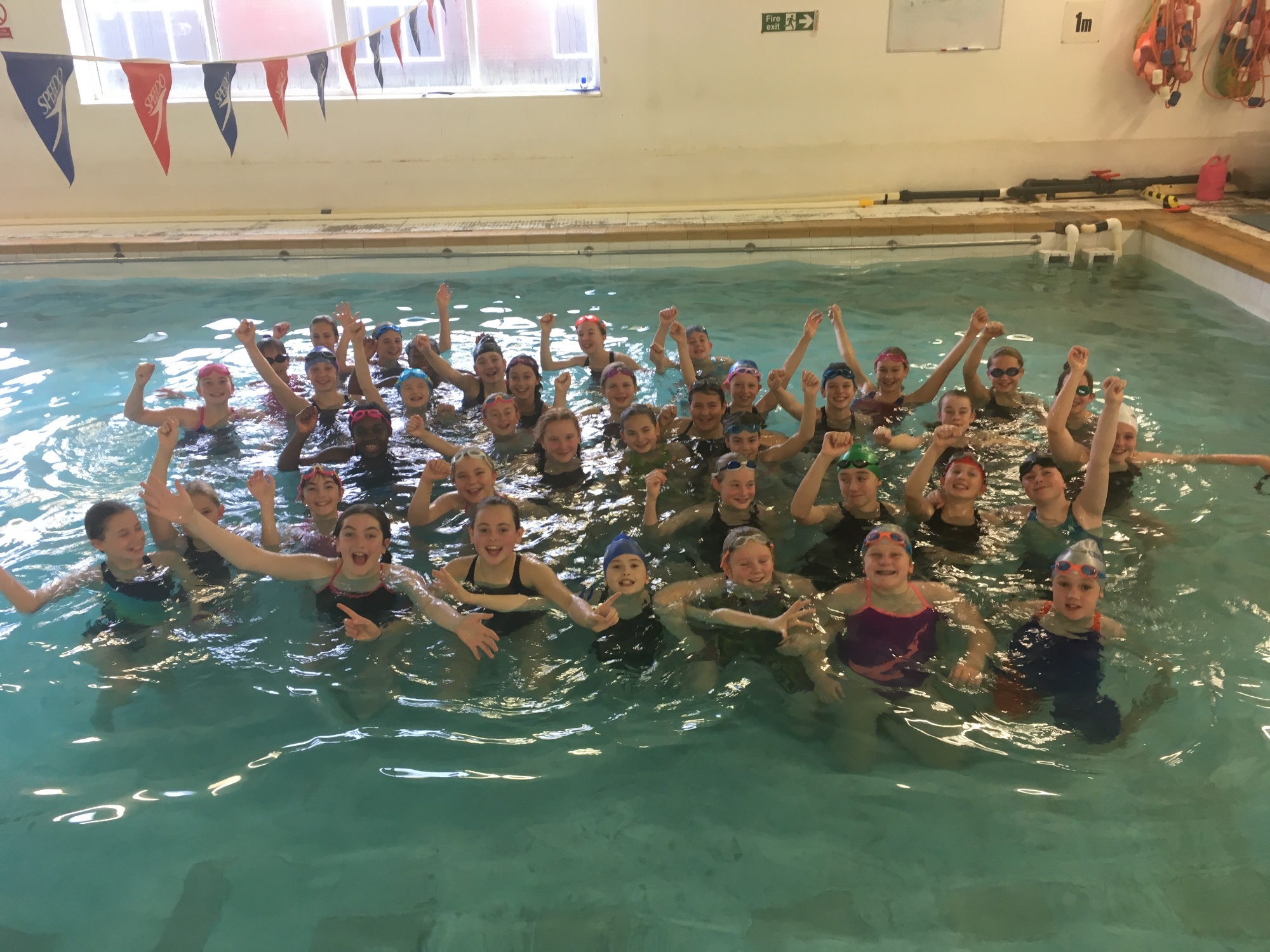 Congratulations to Evie Warwick (7D) who beat a 13 year club record (set by a now commonwealth swimmer)  at the weekend. Swimming 50m Freestyle in 30.79 seconds.

Chloe Jones in 9R took part in the County Championship for Archery this month. It was her first ever competition and her mother tells us that she was wracked with nerves. Hours of practice paid off and she shot really well, becoming County Champion for her age group and bow type. Congratulations Chloe, we look forward to hearing more about your achievements in the future! 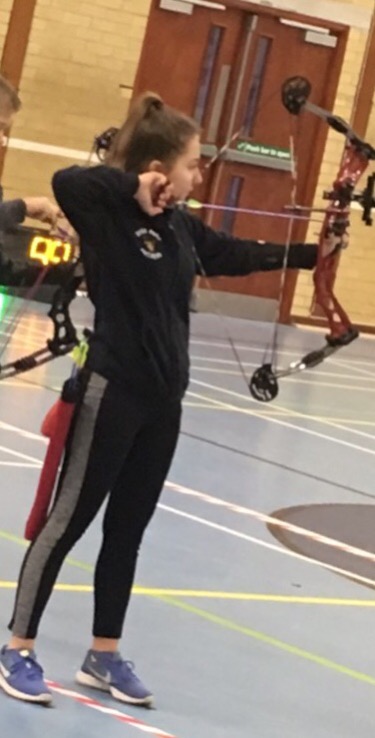 We have lots of accomplished artists at Ribston so we have decided to showcase their art by sharing with you different year groups work during the year. This month's artwork is from Year 10 and depicts Van Gogh's Starry Night with Oil Pastel as a colour task and Starry Night as a line task where the main colour has been removed. The amazing eyes have been drawn by (top to bottom) Sadiya Ginwalla, Jia Zhao,and Clareece Saysell. 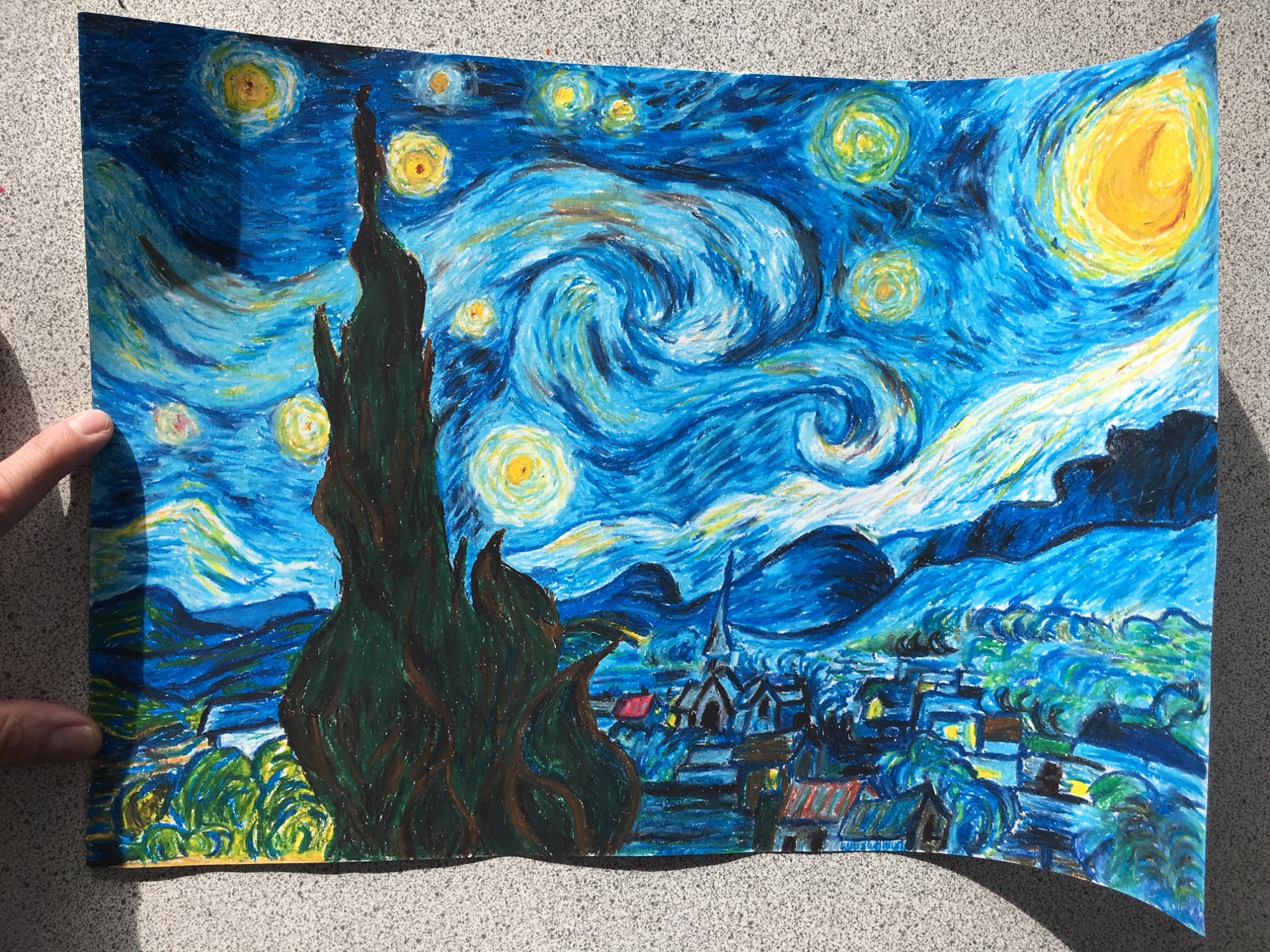 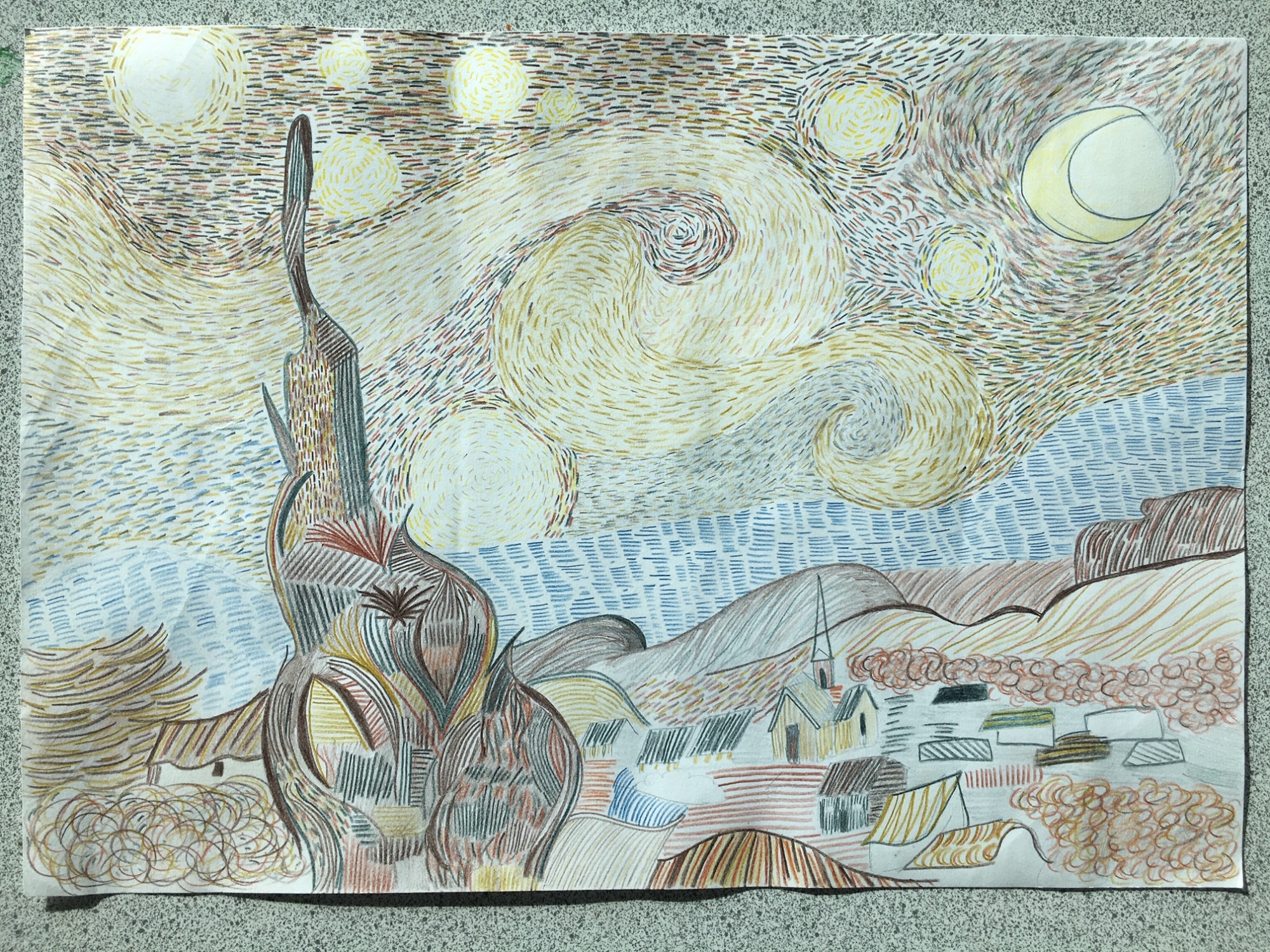 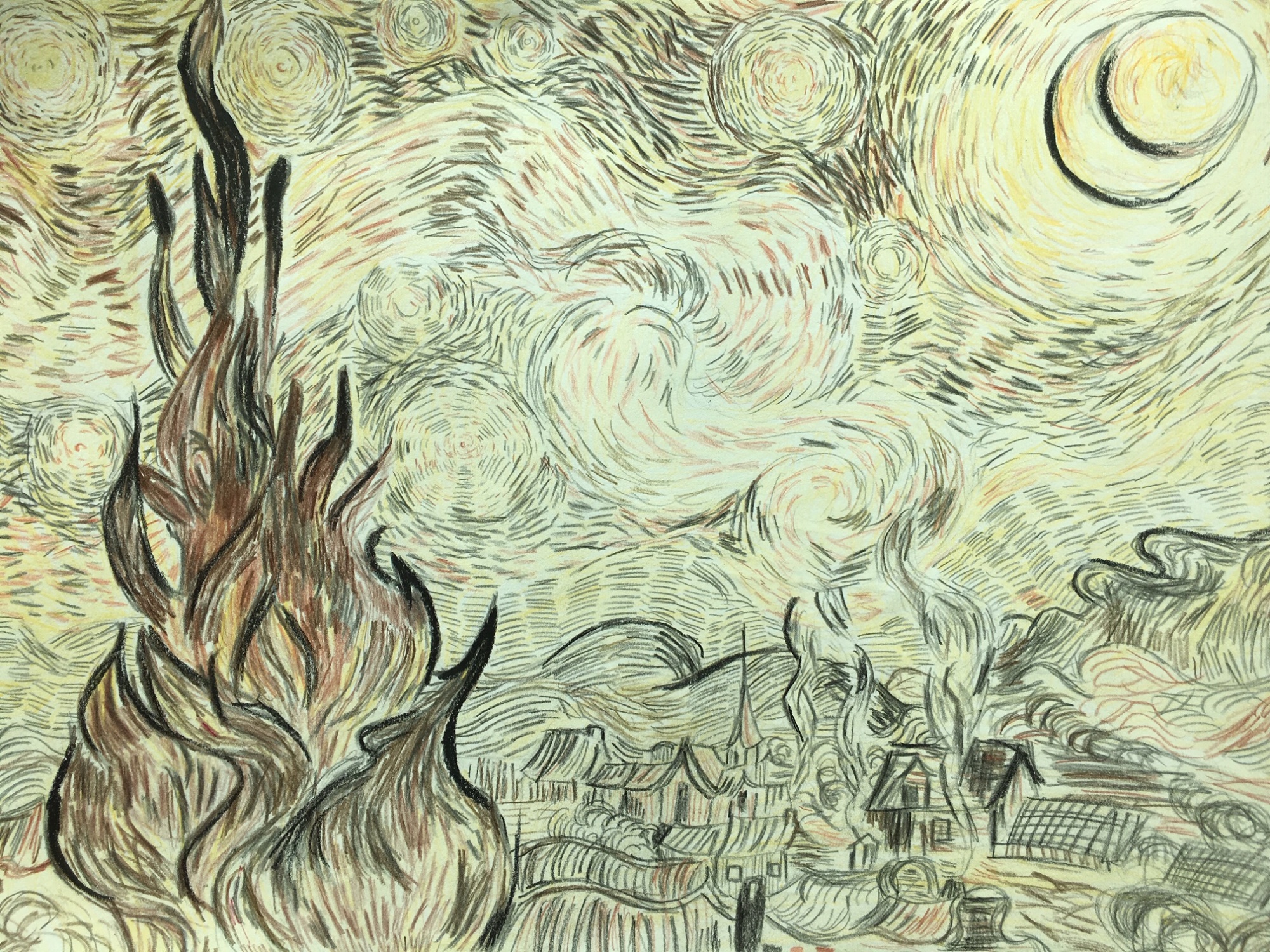 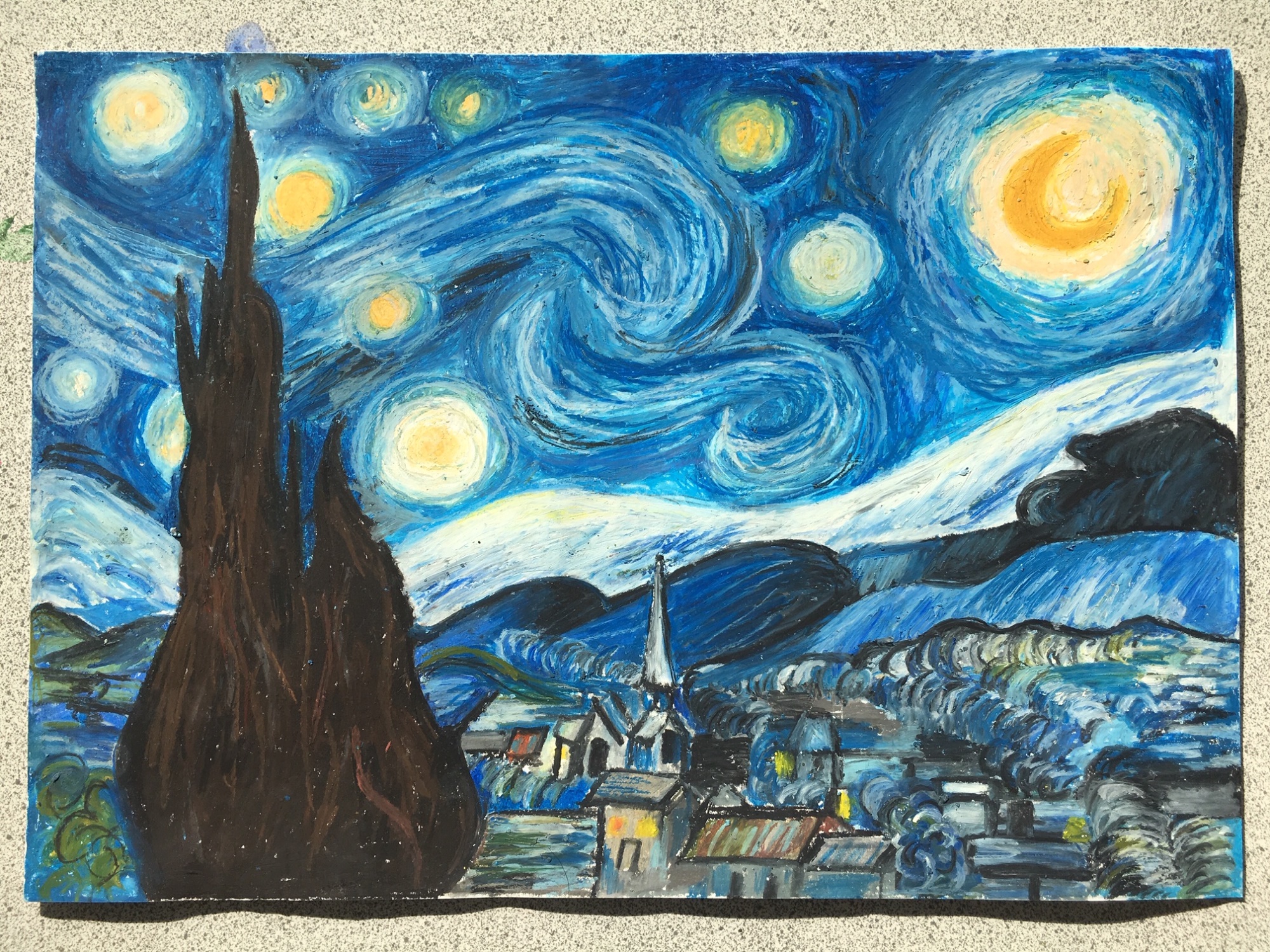 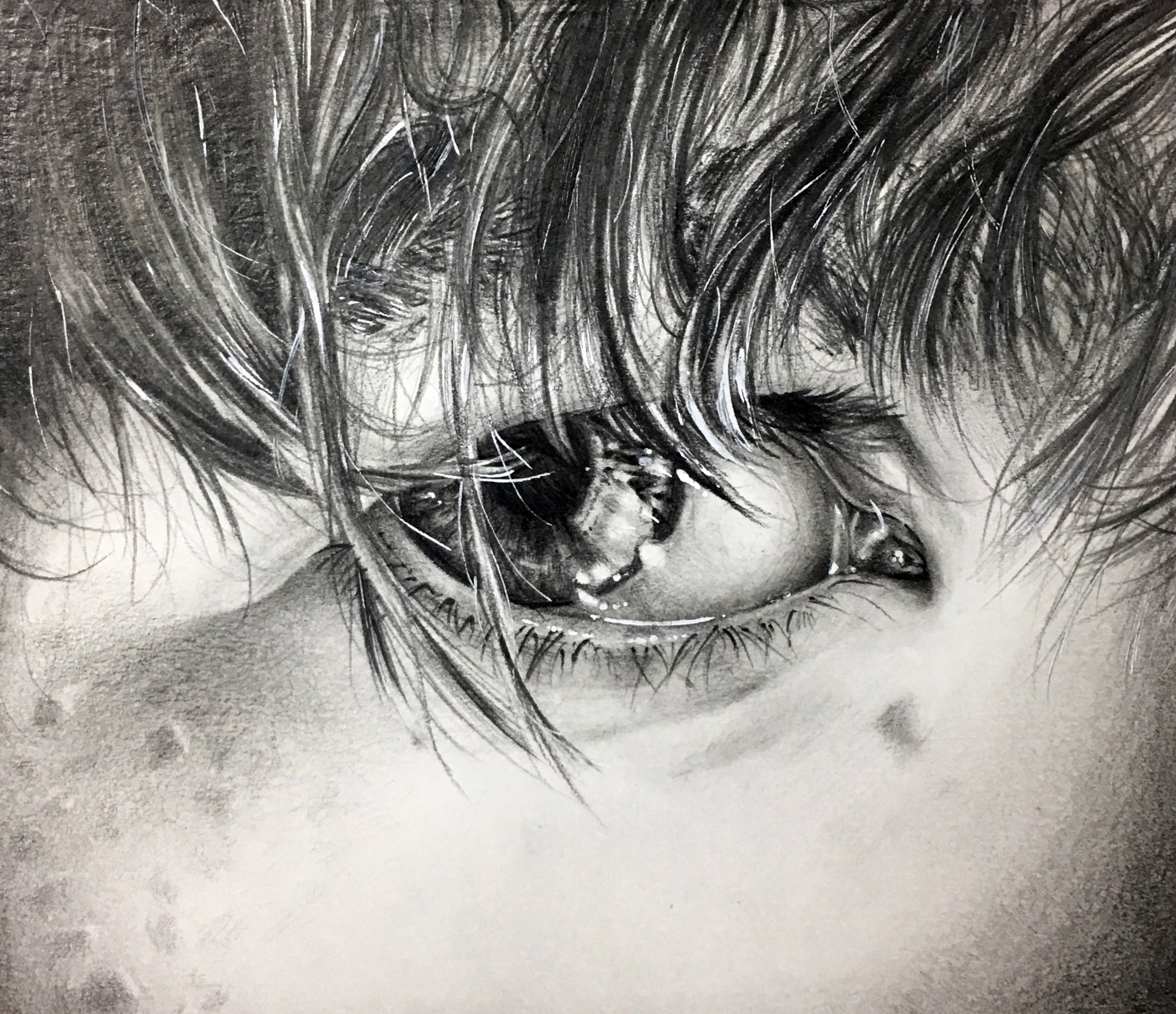 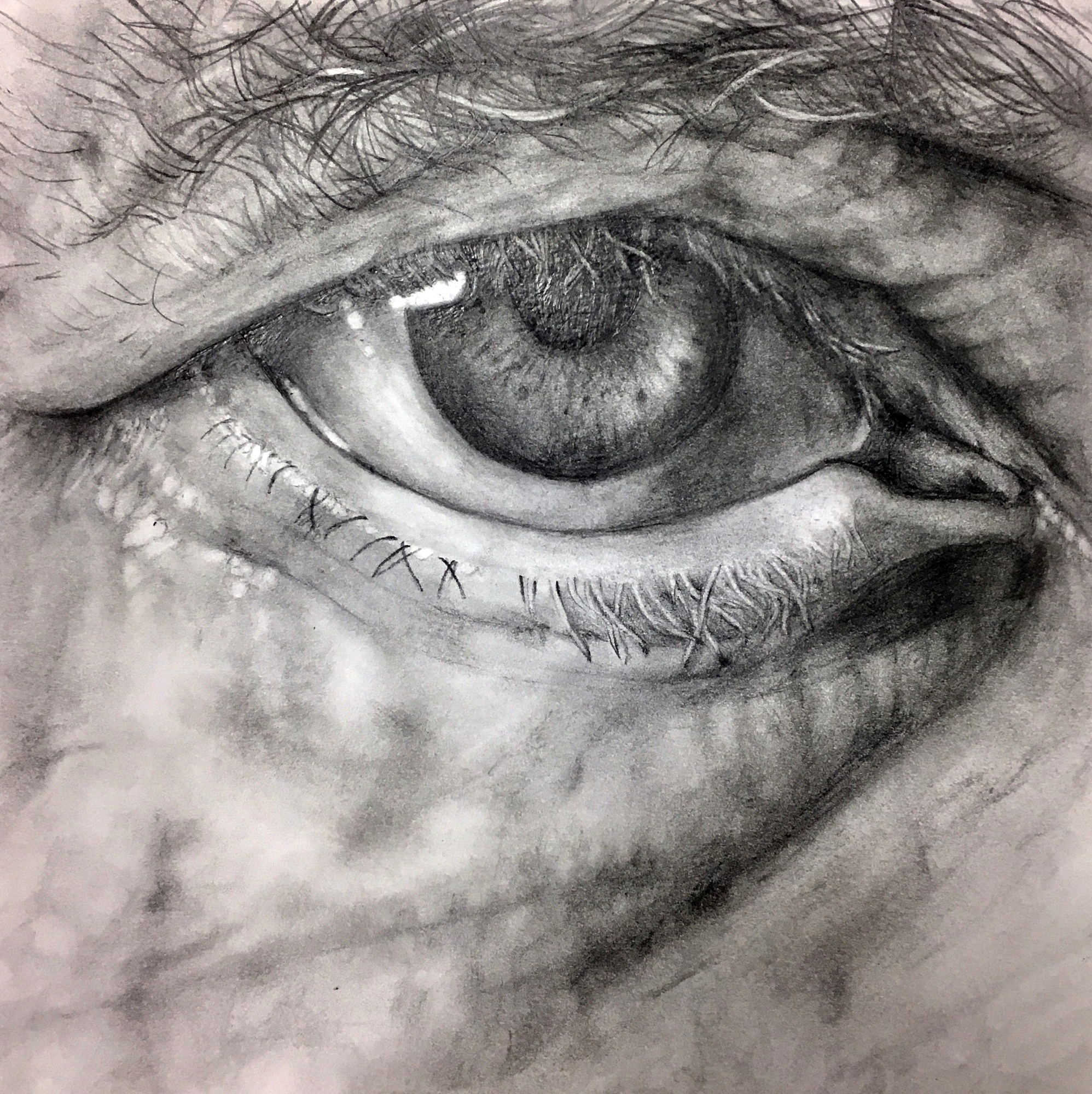 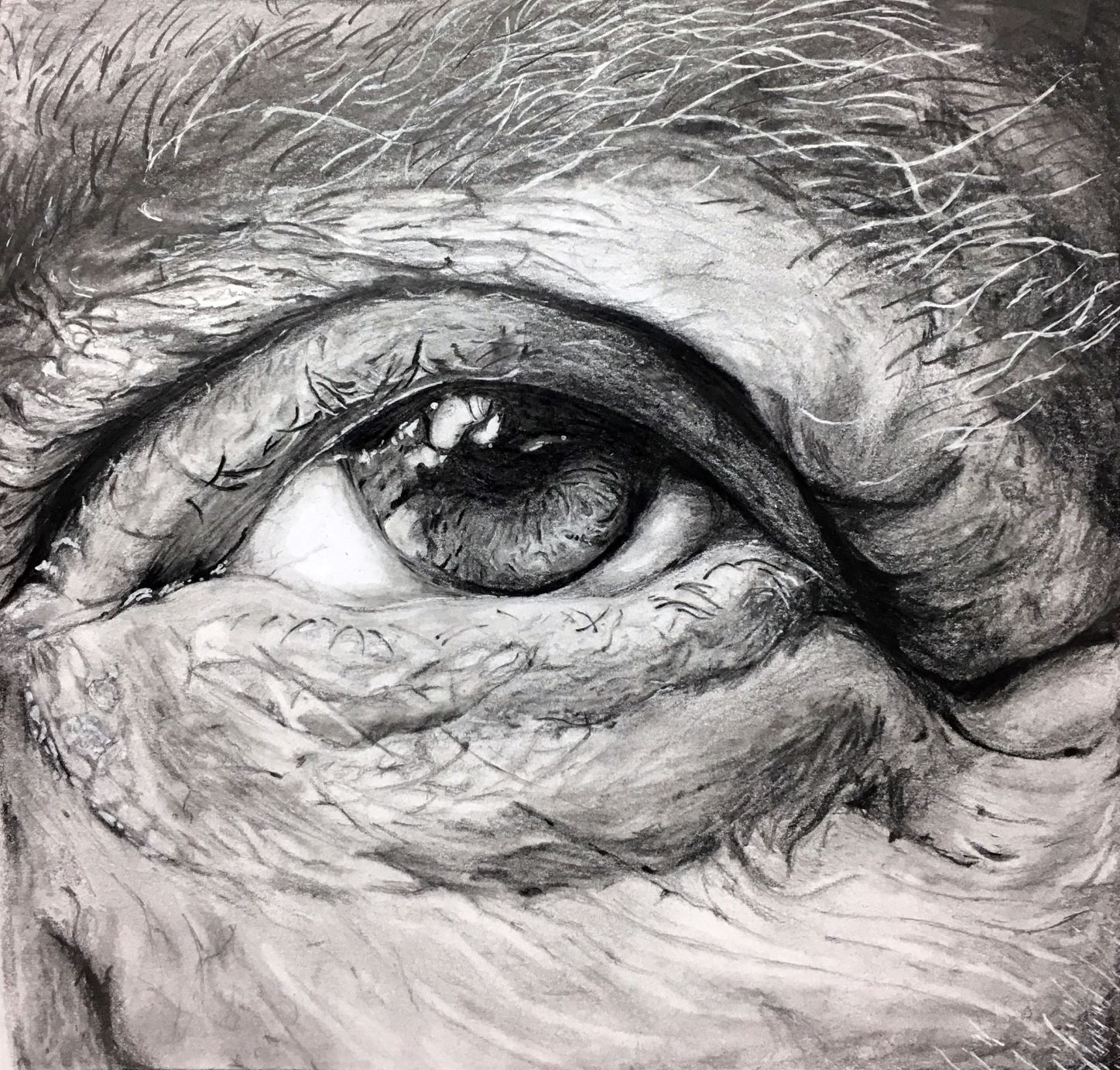 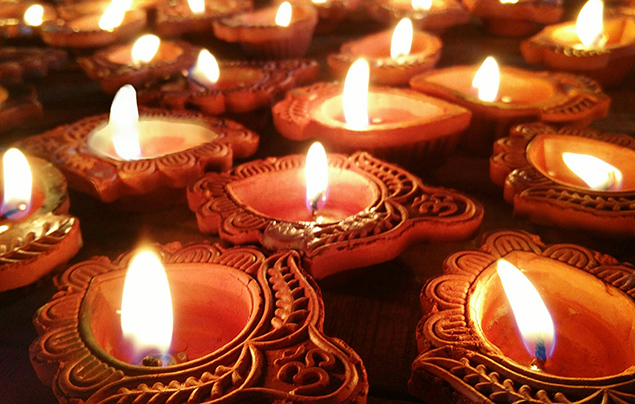 Diwali is the five-day festival of lights, celebrated by millions of Hindus, Sikhs and Jains across the world. The festival, which coincides with the Hindu New Year, celebrates new beginnings and the triumph of good over evil, and light over darkness. To celebrate, the R.S. department ran a variety of lunchtime activities for students to enjoy and to help them learn more about the festival. For example, students were invited to complete puzzles and games about the story behind Diwali, look at images of the Goddess Lakshmi and identify the symbolism behind her depictions, create Diwali cards, colour in Rangoli patterns and make Diya lamps out of paper. The next festival the department will be celebrating is Hanukah (3rd December).

On the 20th of October, we departed at 4:00am for our journey to Paris. The art trip provided us with  once in a lifetime experiences and we developed our skills ready for art GCSE in the most artistic place in the world!

We said goodbye to our parents and departed for 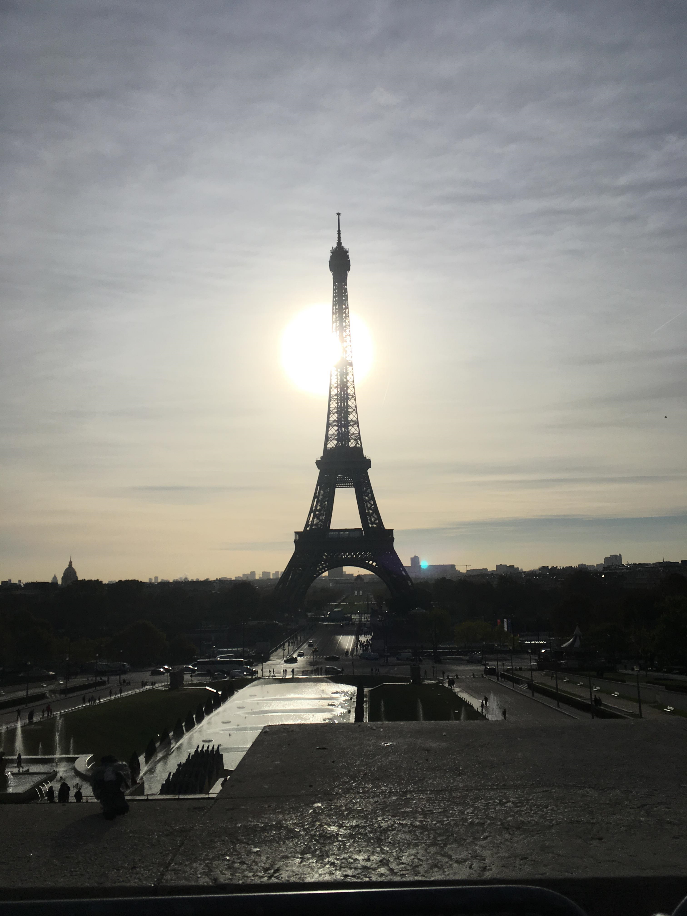 our journey.  Everyone was excited when we reached the Eurotunnel. We took plenty of pictures before we had even got off, as there was so much to observe in France when we got there, such as the colossal buildings and their architecture, the Eiffel Tower (from a distance) and the stalls littered around on the streets where they would display artwork and sell it. When we finally got off the coach, we boarded a boat, on which we saw even more aspects of Paris and its culture. When we left the boat, the sun was setting, and it made Paris look even more breathtaking.

Our first stop was an art gallery, called “Musée de L’Orangerie”. There were so many beautiful and bizarre pieces of art; some were three dimensional, and some filled up the whole room- such as Monet’s Water Lilies collection, which was amazing.  Our next stop was to visit the world’s biggest Art Museum, called the Louvre; the main attraction was the Mona Lisa. A shopping centre called Galeries Lafayette was where we went next. It was full of expensive brands and high-end items where we just explored until we had to go back to the hotel.  We then ate and had a drawing contest at around 9:00pm, where we had to replicate our best picture we took of the Eiffel Tower on a postcard as a drawing. The winners were awarded mini Eiffel Tower key rings.

We arrived at the base of Montmartre where we took could take photos of the Montmartre and the Basilica of the Sacré Coeur which was at its summit. We climbed the steps to reach the top of the hill and took photos of the hill and a great view overlooking Paris. We then went to the Place du Tertre where we were able to see a range of artists actively painting and drawing as well as viewing their finished paintings. We were driven to the Georges Pompidou Centre. The Pompidou Centre displayed modern art from the 20th and 21st centuries and it displayed art in many forms of sculptures, paintings, optical illusions, cinema, photography, plastic arts and many more. We then travelled to the Place d’Italie. At the Place d’Italie we were met by two Graffiti Art tour guides, who took us to see 12 graffiti art walls which were graffitied on by some of the worlds’s top graffiti artists. After the graffiti art tour, we went back to the coach which then took the group to Flam’s restaurant which is where we all dined for the evening meal. In the restaurant we were given pizza to eat for our mains and then for dessert we were given pizza again only with a special chocolate topping! After the meal we went to Paris’s tallest building called The Montparnasse Tower, which is 56 floors high. The group took the elevator up to the top of the building where we were able to take photos of Paris at sunset in the open-air viewing platform. We then went back down to the coach which then took us back to the hotel to spend the rest of the night at our own leisure.

This was our final day in Paris, so in the morning we 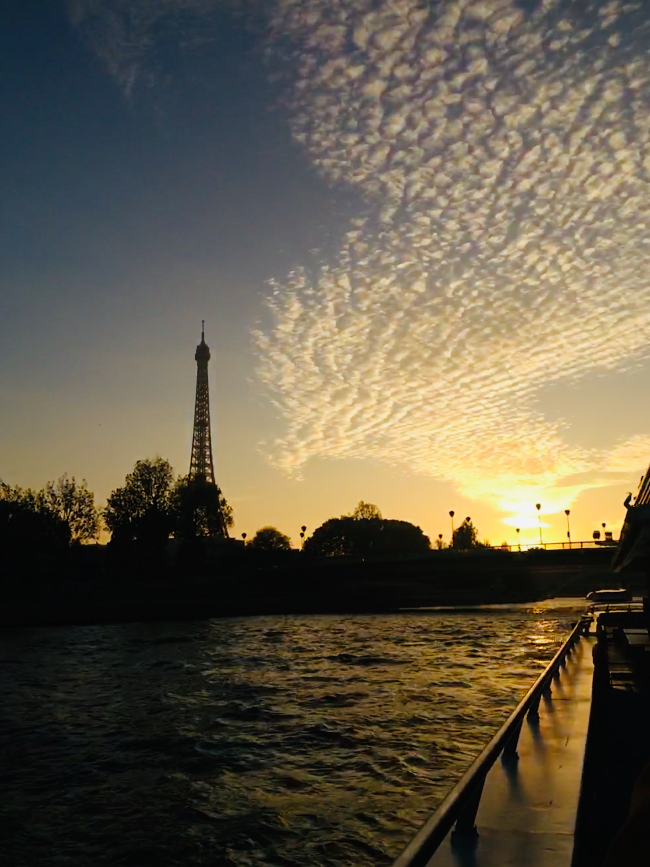 packed our bags and cleared our rooms out, we then boarded the bus ready to go to the Museum of Modern Art. On the way to the Museum of Modern Art we passed the Eiffel Tower and took a short break whilst admiring the Eiffel Tower for the last time, before then travelling to the Museum of Modern Art. When we arrived at the Museum the group was lead to the entrance and then we could explore the gallery by ourselves in small groups. The gallery was a collection of photos and paintings painted by few famous artists including Picasso. in the gallery we also had the opportunity to buy some souvenirs. When the group met again we walked back to the coach ready to leave Paris. A few hours later we reached the Eurotunnel where we boarded a shuttle and traveled back to the UK. At 9pm we reached the picking up point in Gloucester to meet our parents and our fabulous Paris trip officially ended.

An account of the trip to Krakow by History Captain, Beth Wadley

Over half term, I had an incredible time on the trip to Krakow, coming away with fond memories and having learnt valuable lessons from the history that we engaged with while we were there.

We began with a walking tour of what was the Jewish district and Ghetto with one of many incredibly knowledgeable guides who taught us about the experiences of those who lived here.  We then visited the site of Schindler’s factory. It was really interesting to hear about his work and I particularly enjoyed learning more about Oscar Schindler and the links to the film, ‘Schindler’s list’.

Being in Poland, one of the most important parts of the trip was visiting Auschwitz and Birkenau. It is difficult to find the words to describe the atmosphere as you walk around, and even harder to imagine the horror that so many faced there. Inside the museum were displays filled with victims’ hair, shoes, glasses, suitcases and many other belongings; these collections remembered the huge number of people killed there as not just statistics but as individual people with individual stories. It was an upsetting and difficult experience; however, it was also a very important one. Throughout the trip we were reminded of the importance of learning from the past to make sure that nothing as horrific ever happens again and I think this is something that everyone came away thinking about.

We also had the privilege of meeting a Holocaust survivor, Marie, who told us about her experiences growing up in the ghetto and her life after her mother escaped through underground tunnels and put her daughter in the care of a Polish-Catholic family while she was hidden by a friend. One memorable story that she told us was about a day when her mother was visiting her and they decided to take the risk of getting on a German tram, where they sat by an SS officer, who gave Marie a chocolate bar and sat her on his knee- her mother was absolutely petrified as the Nazi officer sat singing to her Jewish child, if only he knew!

We also had a visit to the Wielicska salt mines and despite a slightly terrifying ride in the very small lift to get out of the mine, we were all amazed by the beauty and history that was displayed inside!

Krakow itself is a beautiful city and we were lucky enough to spend some free time exploring the markets in the main square and buying souvenirs to take home. Thank you to all the staff who made it such a valuable experience, I know that we all learnt and took a lot away from the trip.

Violette Miller 10R has been selected to take part in Amnesty International’s Youth Advisory Group. Violette will go to London to take part in meetings throughout the year to give her views on Amnesty’s campaigns, website and how to get more young people involved in their work. Only around 20 young people are selected each year so this is a fantastic achievement. Amnesty are very lucky to have Violette’s input as she is an enthusiastic and proactive student with lots of ideas. Well done Violette for being selected! 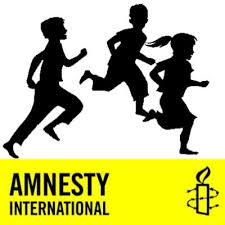 Violette has organised and run a Amnesty International club at Ribston for a year now and the club has continued to grow. We welcome any new members to join our club which meets once a fortnight on Thursdays in H4 at lunchtime. If you are interested and would like to know more please either speak to Violette, or Miss Erro.

Christmas food Collection - can you help us to help those less fortunate at Christmas?

Last year, led by Mrs Stoner, Ribston made 40 hampers for local families as well as collecting food and toiletries for the Gloucester Food Bank and Homeless Shelter. Families were overwhelmed by the generosity of the Staff and Students from Ribston Hall. We would like to do this again this Christmas.

Donations of 'in date' packets, tins, boxes of food etc, alongside items such as toothbrushes and toothpaste, wipes, deodorants and shower gels would be very gratefully appreciated. Items can be given to form tutors or given in to the Food room/Mrs Stoner. It would be fantastic if we could donate the same number of hampers this year if not even more. Thank you.

Following a very successful second-hand uniform in October, where over £90 was raised for R.H.A., we are now very low on second-hand uniform. If you have any to donate, please could it be handed in to Mrs Stoner in the Food room. Many thanks. 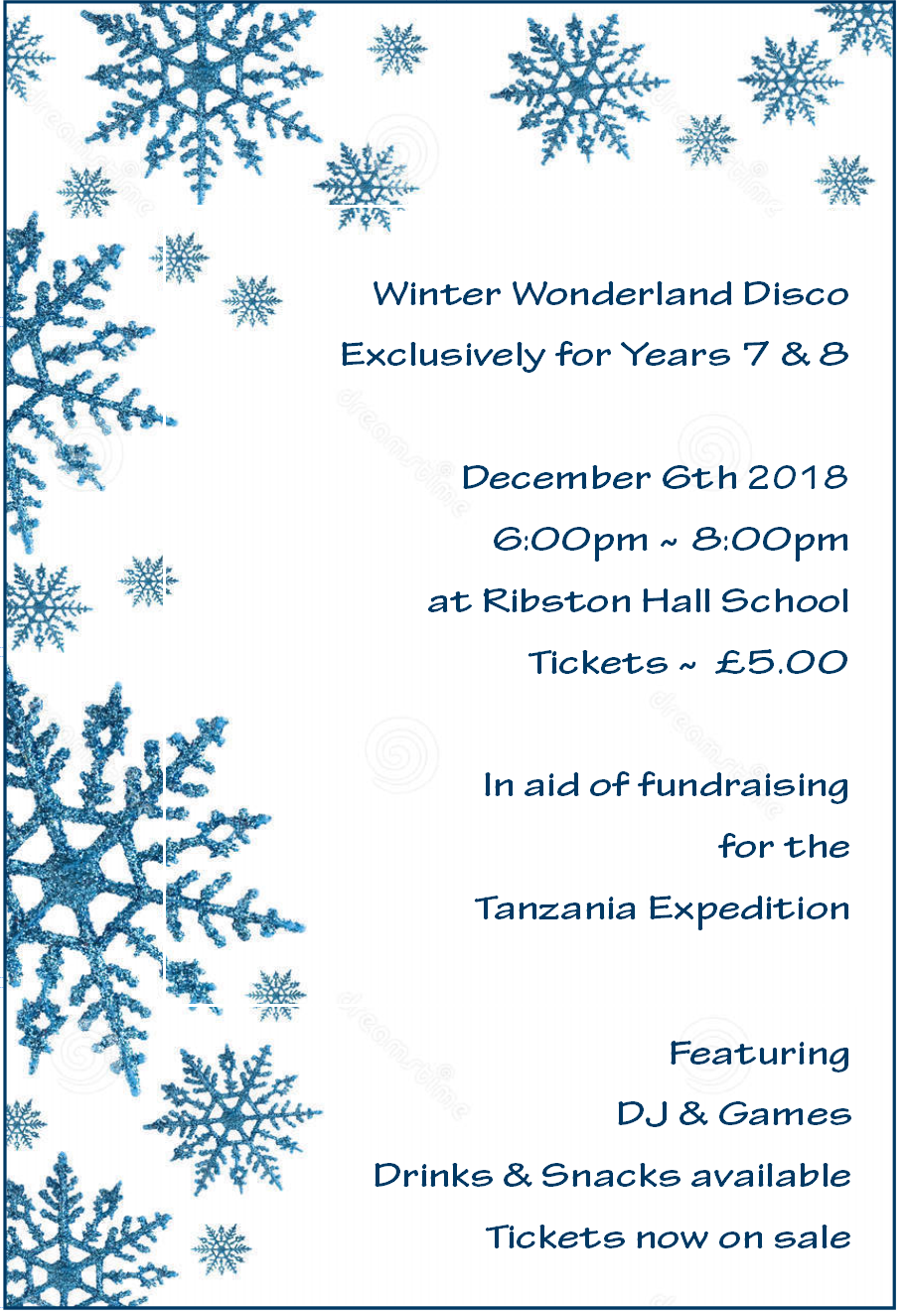